Background
Pruning and thinning are relevant silvicultural operations used to increase wood production and quality from Pines or Eucalypt plantations. Usually, pruning is a common silvicultural practice throughout the globe, and it's been done manually. Most of the pruning shears are manually operated, but more recently, battery scissors came into the market, enabling the removal of thicker branches due to their torque engines. These electric scissors can cut branches up to 50 mm in diameter and they weigh less than 1.0 kg, while mechanical scissors weigh around 0.7 kg and cut up to 35 mm.
There is a notable reduction of up to 11% in a heartbeat per minute when operating battery scissors instead of a manual unit doing the same pruning operation on Eucalyptus plantation. The local market has a few pruning shear brands such as Felco (manual), and electric models such as Pellenc, Infaco, Zanon and Jacto.
Methodology

A 21-month-old Eucalyptus plantation, 3m x 2m spacing, was used to evaluate the operational performance and a comparison of manual versus electric powered pruners. It was pre-set with a maximum height of 2m and a tree clockwise cutting procedure for all workers. 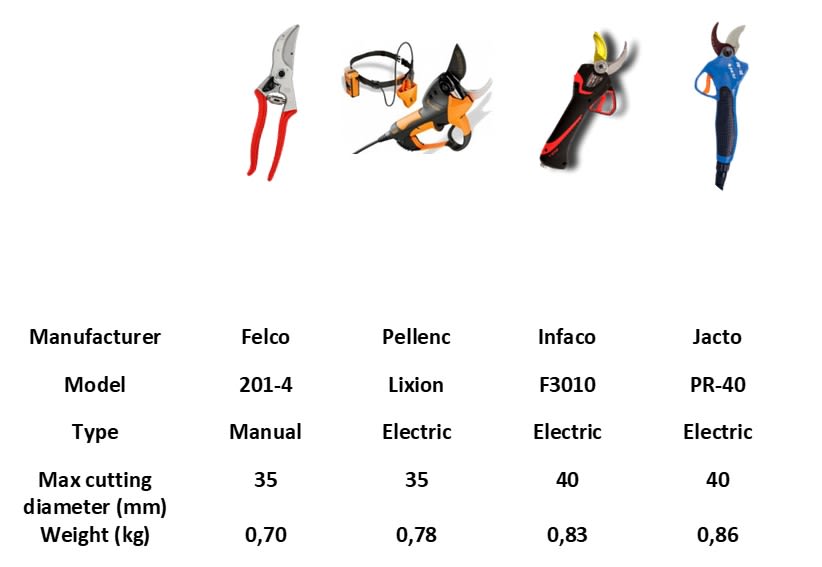