A review of planting technologies

With the increased realization of the benefits offered by integrated forestry, there is a gradual shift from manual and semi mechanized to fully mechanised planting machines. Forest machine manufacturers such as Bracke Forest AB, Komatsu, Risutec, Novelquip etc have developed planting heads which can be attached to wheeled or tracked carriers for efficient planting during re-establishment. The planting machines can be categorised based on their carriers, as either tracked or wheeled. Furthermore, across the world, we currently have planting machine concepts which are yet to be tested and commercialised.
TRACKED PLANTERS
Tracked carriers have dominated the forestry industry for the longest time and manufacturers of machines such as Bracke Forest, Komatsu, Risutec, and the M-Planter have used these carriers to mount their heads to plant seedlings in the forest space. These heads have different seedling carrying capacities and can plant seedlings at different speeds. Tracked machines are advantageous because they more stable, they cause less damage to the site (better flotation), they can work on steep terrain if fitted with levelling capabilities or single/double grousers. In this review we will focus only on the Bracke, Risutec and the M-Planter machines which prepare and plant seedling as well as the Komatsu D61EM which does not prepare the soil but only plants seedlings.

Bracke
Bracke Forest initially released the Bracke P11.a head which could conduct the full scope of regeneration work from scarification to planting with a single machine. This head is equipment with a 72-seedling carousel which makes a mound of inverted humus, compacts it and then sets the plants in the middle of the mound, however depending on the soil type, planting can be done directly without scarification or on scarified patches. The carrier is designed to be able to carry water, pine gel, fertilizers and seedlings on it moreover the head is manually refilled when empty.

Following the release of the Bracke P11.a was the Bracke P12.a planter which is intended for planting in warm, dry conditions. This head can either solely plant or scarify and plant. It is equipped with a new and bigger carousel which can take about 196 seedlings. Unlike the P11.a, the P12.a makes a planting bed at the bottom of a hole. The hole is formed by a specially designed foot; the seedling is placed in the bottom of the hole and, the P12.a is also equipped with fertilisation and irrigation capabilities (water / gel). Continuing with development and improvements Bracke has released a new planting head the P12.b in production in Brazil this year.
For more information on the Bracke P12.b visit: BrackeForestAB 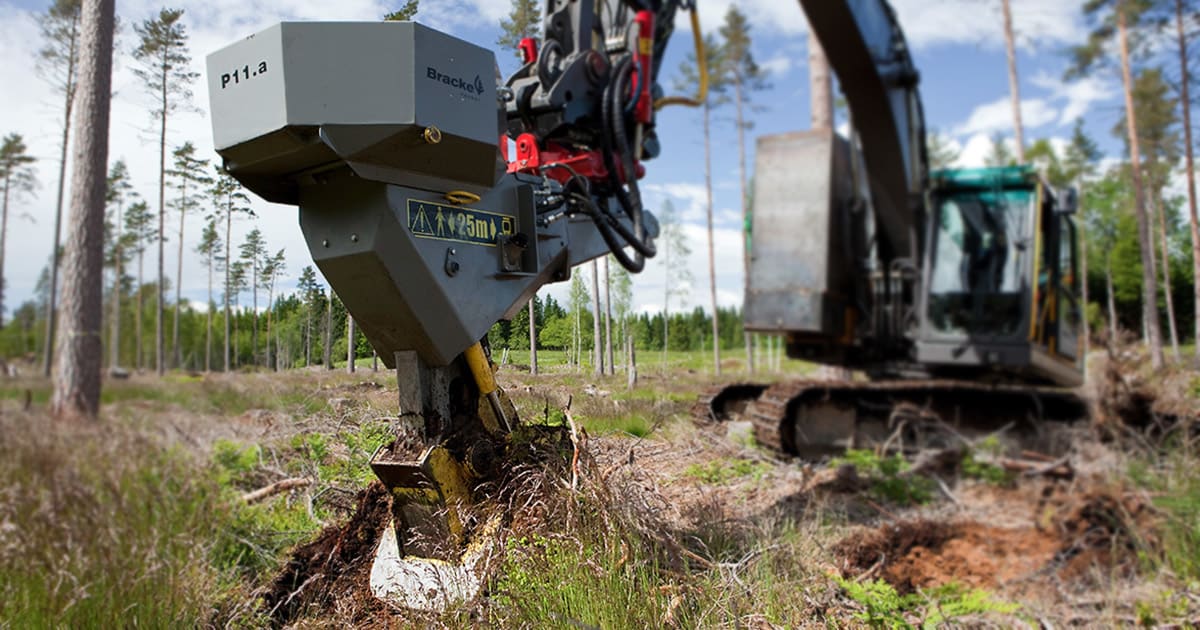 Source: Bracke Forest website
Komatsu D61EM Planter
It’s a purpose build planting machine which operates on flat ground in straight rows. It comprises of a Komatsu D61ex 150EO – 125kW tracked tractor, carrying three Bracke Forest B10 planting heads. Each head has the capacity to plant 196 seedlings and the dozer also pulls a 5000L water tank for irrigation during planting. Planting rows for the D61EM are prepared by a subsoiler which creates a map with a GPS to mark the planting rows, this map is then uploaded to the planter which directs the planter when planting the seedlings. Moreover, the GPS also controls the spacing between the plants in each row. The GPS also records the planting spots during planting. 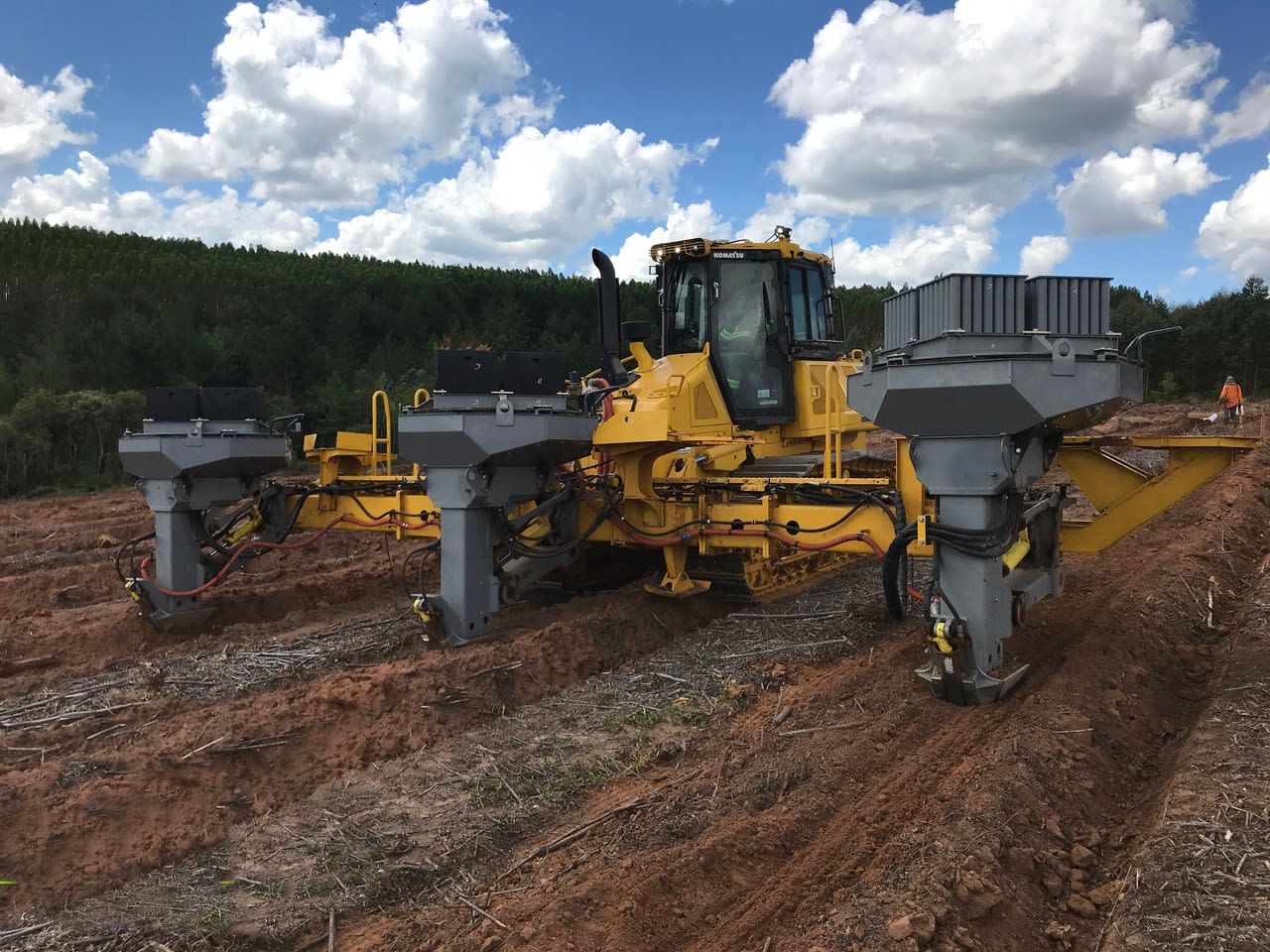 The Risutec ASP-720 is a mechanised planting head designed to conduct large scale pitting and planting of plantation forest species such as eucalyptus and pines. The excavator-based carrier with the head functions optimally on semi-arid and arid flat terrain. Amongst the ASP-720 there is Risutec ASP-360 and Risutec ASP-150, however the ASP-150 is used for natural (larger) seedlings. ASP uses a pitting soil cultivator that crushes the and loosens the soil. The pitting head has an approximate cracking depth of 60 cm with an 80 cm diameter. During pitting and planting the head uses the ASTA-ex which is a guiding system that ensures the correct seedling location thereby achieving planting accuracy. The ability to combine all stages of reforestation – guidance, soil cultivation, planting, compaction, watering, herbicide and fertilizer application with real time monitoring and control also is a significant advantage over manual planting. 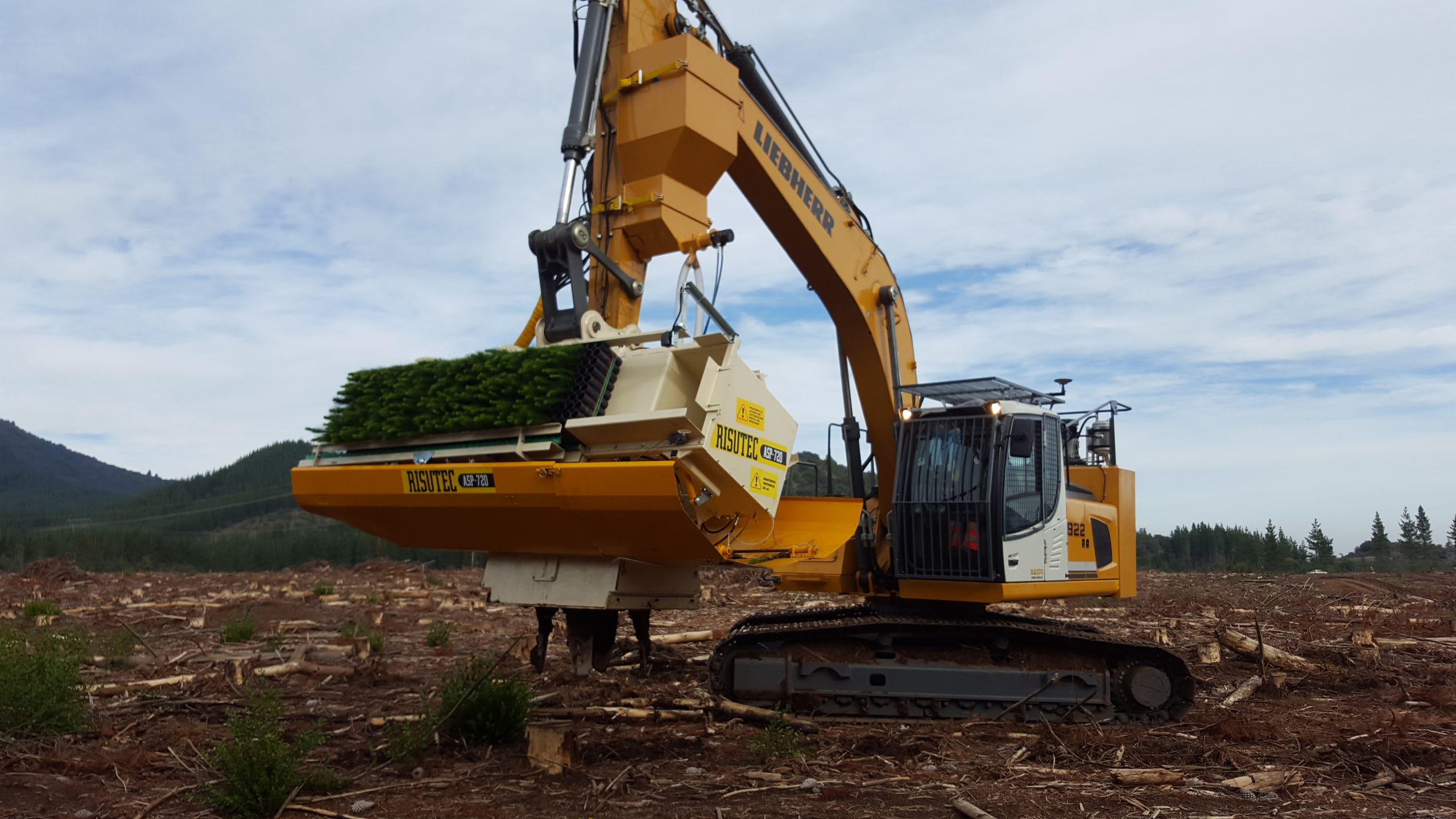 The M – Planter is a mechanical tree planting head attached to an excavator-based carrier. Prior to the release of the M-Planter single heads there was a double headed planter which planted two seedlings at the same time and fertilizes and waters the ready planted seedlings. New developments came with larger seedlings holding capacity to ensure better efficiency and renewed hydraulic systems to ensure efficiency. After the M-Planter developed single headed planters the M-120 and M-160M. The M-160M was later improved to 160R, this head had enforced body, bigger seedling capacity of 160 seedlings and spade for additional soil preparation and harvesting residue sweeping. Moreover, the M-160R was equipped with a ripper for deep impact soil preparation and can be used to plant with the hydrogel as well as fertilizer, growth hormone or rooting agents. Additionally, the head can be equipped with herbicide, insecticide or pesticide spray systems. 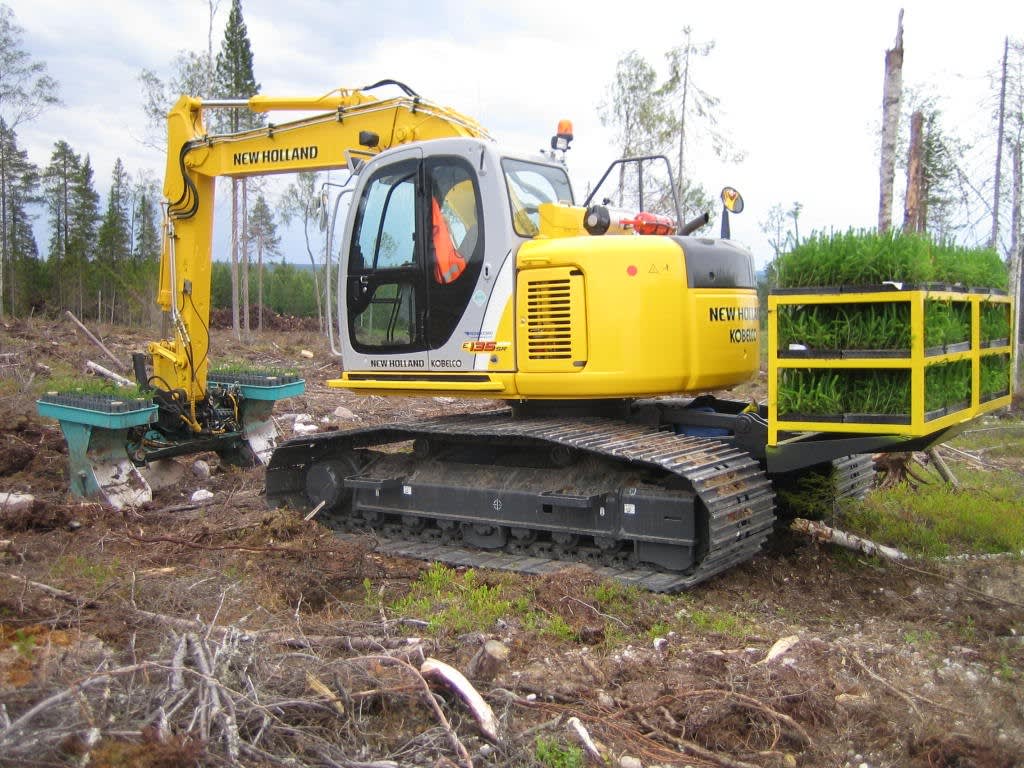 In the forestry industry much of the carriers used are tracked carriers, however wheeled carriers are being developed. The advantages of using wheeled carriers include ability to work in rough ground conditions, easier and quicker manoeuvrability between planting sites. The release of machines such as Plantma-X indicates that wheeled carriers can be used successfully in planting operations. The forestry industry will most probably see more wheeled carriers coming into the market in the future.
Plantma-X
PlantmaX is a machine that has been developed by Platma AB for mechanized plantation of forestry seedlings. The Plantma-X is basically a conventional forwarder adapted with, among other things, extended frame, a MidiFlex ground preparation unit in the centre part and two planting arms at the back of the machine. The Plantma-X has planting arms, planting cab, seedling storage with crane, Midiflex Scarifier control systems, hydraulic and pneumatic valves to operate the planting arms. It is specialized for mechanized planting of forest plants under Swedish or related conditions and performs several operations at the same time – soil preparation, pressing the tilt and planting a seedling. The machine will in one pass, cultivate the ground, compact it and plant a seedling. During December 2021 through March 2022 Plantma-X has been planting in the Southeast US and the goal for 2022 is to sell 4 units for delivery this year. 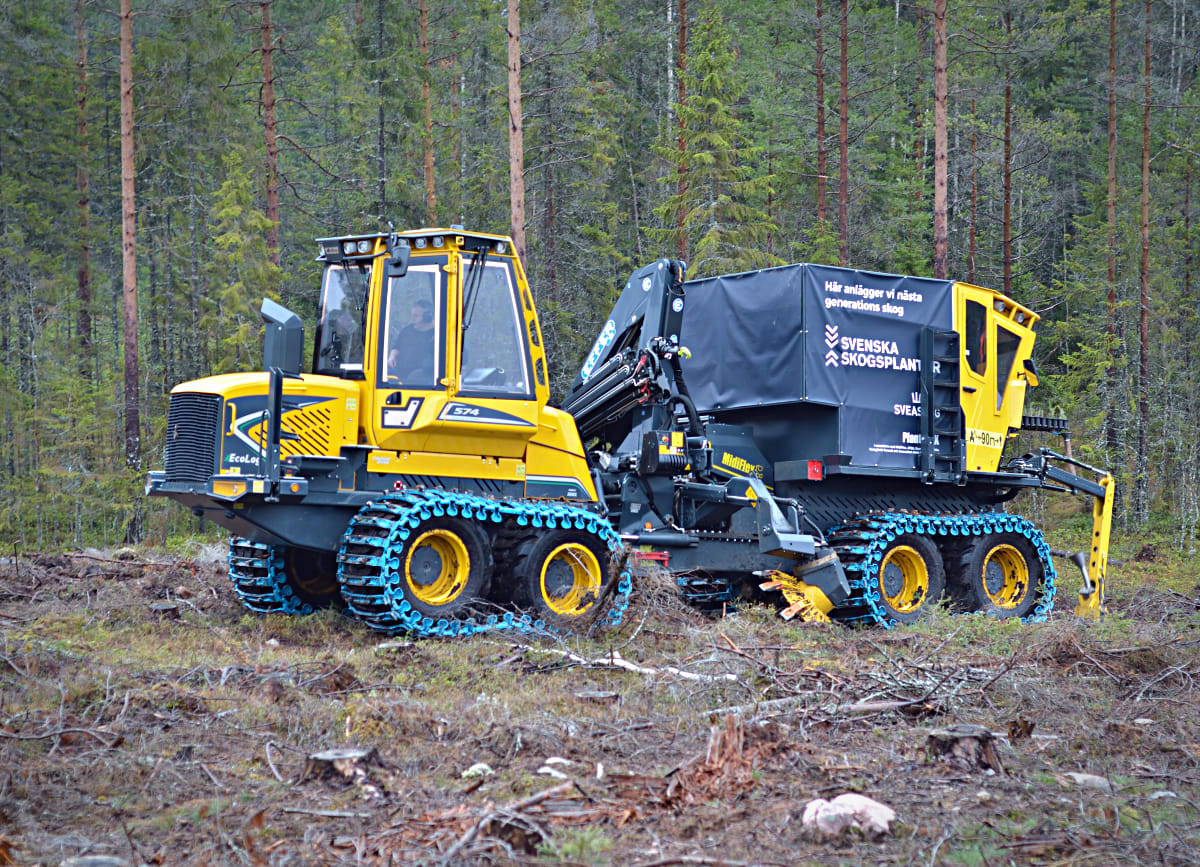 Source: Plantma-X website
CONCEPTUAL AND FUTURE PLANTING MACHINES
The future of silvicultural activities lies on robotic and autonomous machines, the Forestbot, Robotic Foresterand AutoPlant among others are examples of conceptual and futuristic machines which are yet to be commercialised and adopted within the forestry industry. These machines will be either be fully or partially autonomous in performing the various planting operations. Though they are still conceptual some are under development and prototypes have been made and they are being tested. Thereafter, they will be evaluated and refined for improvement before the final product can be launched into the market.
Real Carbon Capture Machine – Forest Bot


The Real Carbon Capture Machine – Forest Bot is a “Industry 4.0 / Smart Agriculture “machine, which uses Artificial Intelligence to geoprocessing, in order to automatically generate the planting map indicating where each seedling was planted (exact GPS position), in order to allow forest management with high technology. The forest planting machine can be considered as a 100% autonomous planting robot. It selects seedlings (a single species), moves and plants without any human interference. RCCM v.4.0 is a 100% autonomous machine, that is, it plants without any human interference. RCCM v.4.0 georeferences all planted seedlings, and uses intelligent systems to move, avoid obstacles and plant. The forestry industry can expect machines for watering, fertilizing, pest spraying, health reading and forest inventory from the RCCM inventors. 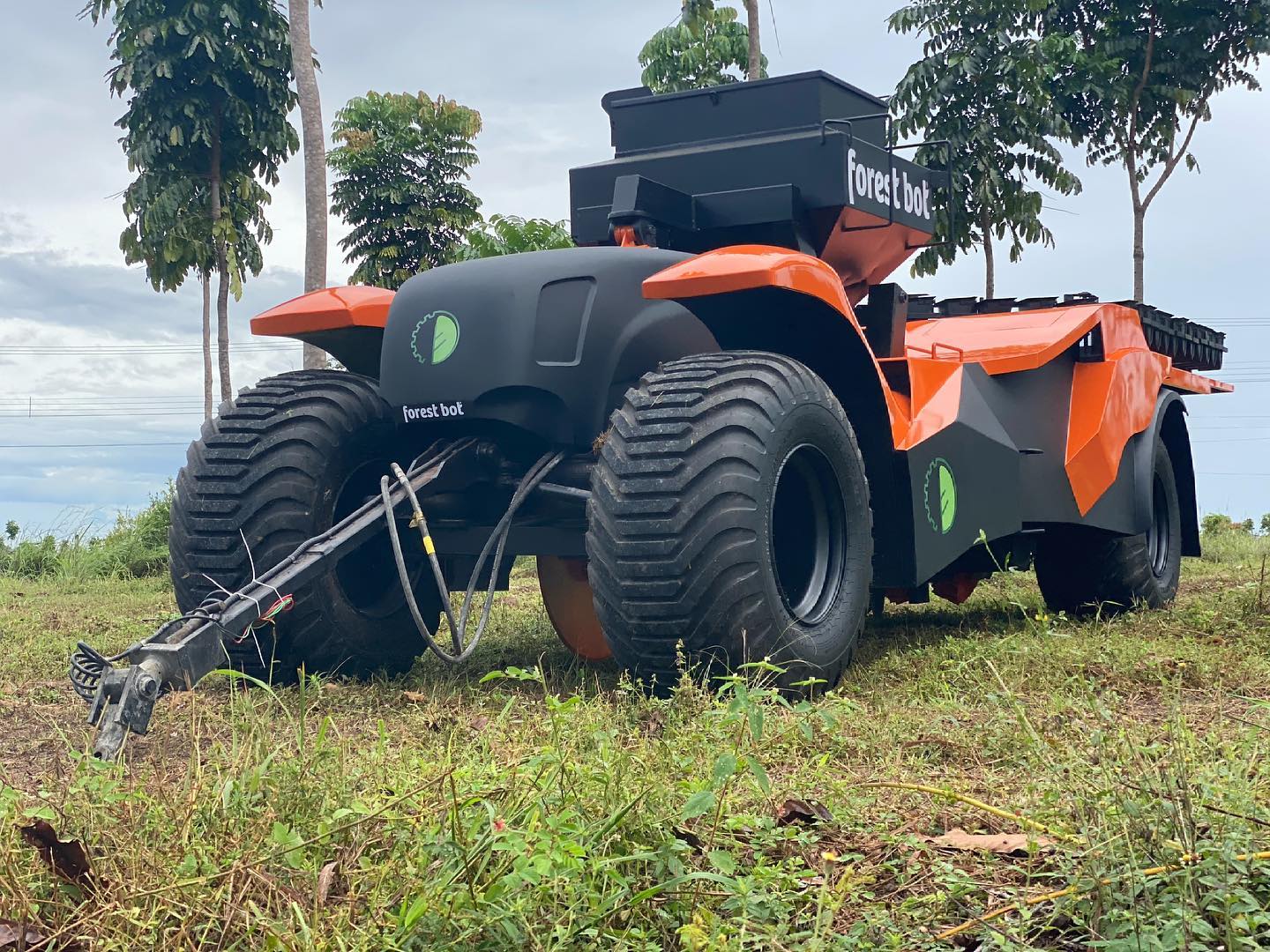 Source: forest.bot Facebook photos
Future planting with the Robotic Forester
This is a semi-autonomous forest regeneration system which will cover all the main regeneration operations such as: soil preparation, planting and early tending/clearing. This machine will automate the first five years of forest management and it will provide the forestry industry with a more productive and cost-effective regeneration solution. The concept of the Robotic Forester includes two different functionalities integrated to the Multiscope UGV. The Multiscope includes the Forester Planter and the Forester Brushcutter. These machines will be working hand in hand autonomously in the field. Soil preparation and planting will be carried out by Multiscope Forester Planter and vegetation management such as early tending will be carried out by the Multiscope Forester Brushcutter which will move autonomously between the planted trees and cut the unwanted vegetation to decrease competition. 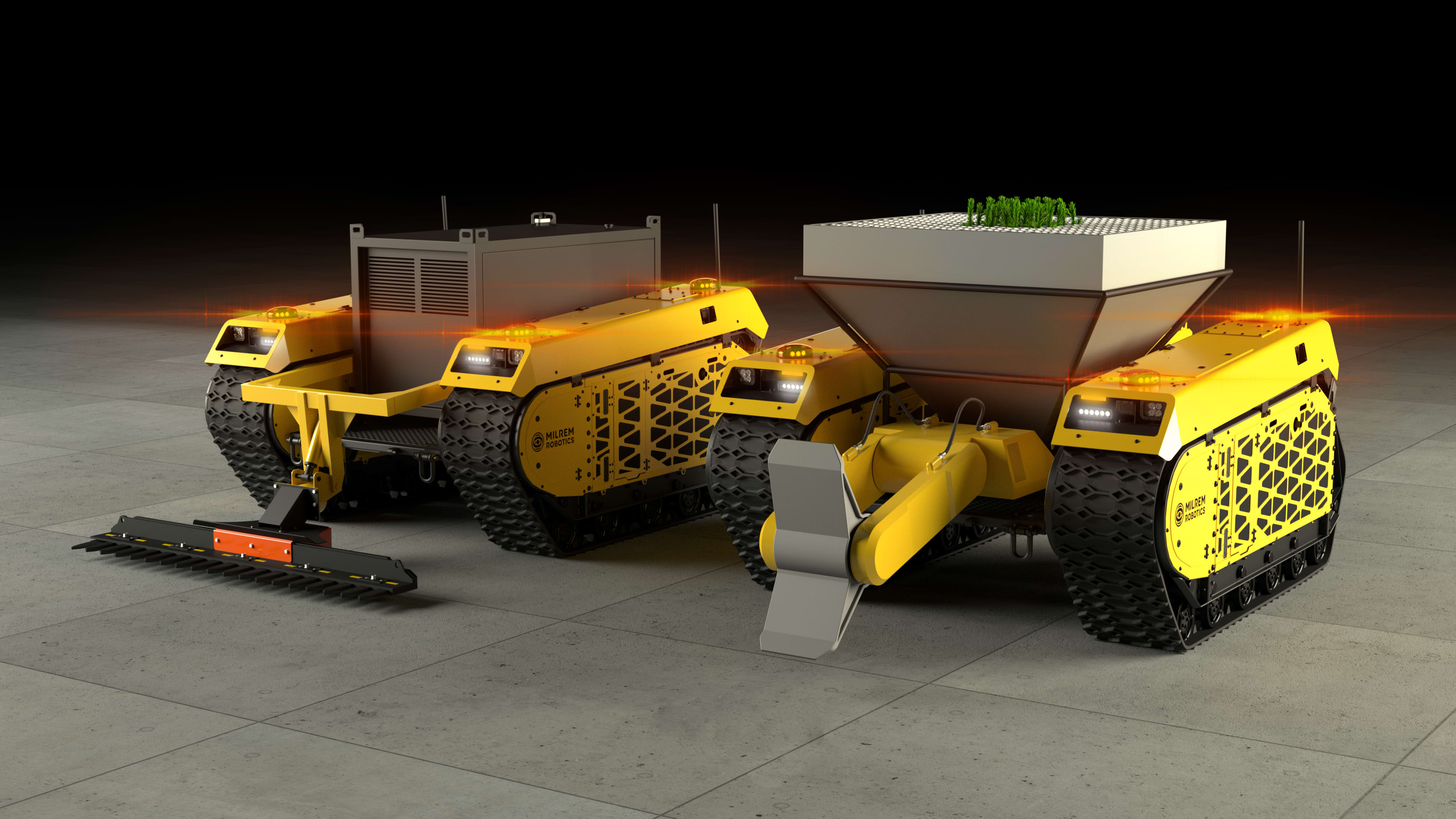 Source: Milremrobotics website
Autonomous forest rejuvenation – AutoPlant.
AutoPlant is a Vinnova-funded collaboration project between the following organizations, Skogforsk, LUT, KTH, Bracke, Skogstekniska klustret, SCA, Sodra, Sveaskog and Holmen. The goal of the AutoPlant project is to develop and test an autonomous forest rejuvenation machine with high precision, low environmental impact and a good working environment. The Autoplant will be developed by working on a number of sub-products such as; (1) system analysis, (2) technical development of soil scarification and planting, (3) sensor systems for navigation and safety (4) tools for route planning, (5) machine platform and integration, (6) field testing. The presentation revealed how the sub-products of the machine parts developers tested them prior to putting them on the prototype machine and these tests helped the different parts developers to evaluate and improve them. The machine will be fully automated and in September 2022 a joint field test will be carried out in central Sweden for all sub-products parts connected to the AutoPlant project will be working together. To get a comprehensive overview of this project, you can watch the video embedded below.

CONCLUSION
With the growth of technology influenced by the fourth industrial revolution reforestation machines are being developed and refined. Tracked machines have traditionally been the carriers of planting heads, however, it can be expected that more wheeled carriers will become available in the future. Trials help machine manufacturers evaluate and test the machines in real forest conditions so that they can be improved. Forsilvitech is aware of other planting machine development projects which are currently in the pipeline which will add to the options available in the market.