Is there potential for hydrogen fueled machines in forestry?

Introduction
Around the world, regulation is tightening to limit greenhouse gas emissions from motor vehicles, thus there is an increased interest in hydrogen engines and hydrogen fuel cells. Using a zero-carbon fuel both hydrogen internal combustion engine and hydrogen fuel cells can power vehicles. Adopted by the agricultural sector, New Holland a tractor making company has made two hybrid electric tractors, powered by hydrogen and lithium-ion batteries. These tractors used hydrogen fuel as their primary energy converter and the power efficiency was 50% compared to 32% maximum efficiency of a diesel engine. As a new promising non fossil energy it would be a great idea for the forestry sector to run its machines on hydrogen fuel.

The concept of hydrogen fuelled machines uses hydrogen fuel cells to make electricity that powers the engine and hydrogen fuel engines. This replaces diesel and petrol engines. Through the process of electrolysis water molecules are split into hydrogen and oxygen. The water required for hydrogen power is much less than the water requirements for petroleum fuel. In the fuel cells, hydrogen is converted to electricity which powers the vehicle’s electric motors thus powering the vehicle. In hydrogen engines, hydrogen is burned in an internal combustion engine like petrol and diesel engines. These two methods have their advantages and applications which best suits them. Hydrogen engines produce water vapor as their waste product which reduces the greenhouse gases released to the atmosphere compared to petrol and diesel engines. Electric motors powered by hydrogen have zero power delay during acceleration and they produce maximum torque. Vehicles and machines running on hydrogen could have more fuel onboard resulting in longer runtimes between refuelling since hydrogen is low in mass. With the amount of solar and wind energy available, agriculture and forest companies can produce the electricity needed to make their hydrogen to fuel all their equipment hence cut long term costs incurred due to fuel consumption and reduce the carbon dioxide emissions. Internal hydrogen combustion engines tend to be most efficient under high loads associated with heavy trucks that tend to spend most of their time hauling the biggest loads. New Holland, JCB are manufacturers who released hydrogen fuelled tractors.
Advantages and disadvantages of using hydrogen fuel
The benefits of hydrogen engines is that they can operate with lower grade hydrogen which is handy when there is a site where hydrogen can be produced using steam methane reforming and carbon capture and storing, this hydrogen can be used without the need for purification. Hydrogen is readily available and is a renewable potential energy source and with the robustness of the hydrogen engines to impurities hydrogen can be used efficiently. Hydrogen reduces carbon emissions and has high energy density which improves productivity. Just like electric vehicles hydrogen powered vehicles are almost completely silent meaning that it produces less noise, this would be suitable for forest machine application.
On the flipside it is currently extremely expensive to produce hydrogen using renewable energy sources and due to its low-density huge storage tanks are required. Forestry machines are naturally heavy thus huge tanks will increase the weight of the machine this will be an issue. Although hydrogen produces water vapor, its production generates harmful emissions and there is still nitrous oxide (NOx) emissions with hydrogen fuelled engines produced. Knocking is a potential issue with engines since the ignition energy required for hydrogen is low thus may lead to engine seizing. 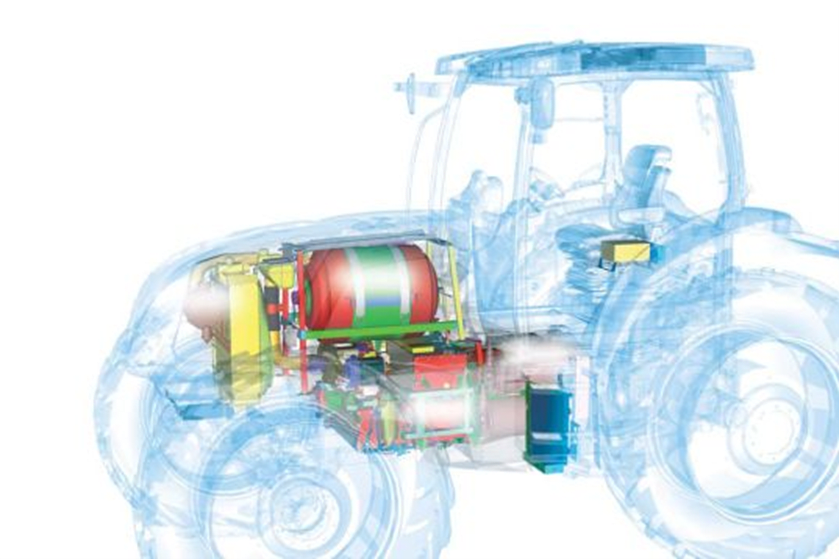 Hydrogen fuel can potentially be an option for powering vehicles and is gaining momentum. Hydrogen engines are reliable, have familiar technology, and deliver environmental benefits. Theoretically, these make the transition into hydrogen engines operationally and economically viable. Moving towards destination zero off-road, construction equipment, agriculture and forestry even ships are likely to become common users of hydrogen engines. This technology still requires refinement and further development before adaptation at full scale in industries like forestry. The agricultural sector is in a unique position to benefit from hydrogen technology, as they can be able to produce hydrogen energy on-site from waste or biomass. It will be beneficial for farmers to have a on-site facility as it could help build energy independence which in turn will reduce fossil fuel use and saving water for other agricultural purposes. Hydrogen fuel will help farmers to run their tractors and machinery more sustainable or climate neutral.
For more information visit:
Fuelcellsworks , JBC , Washington State University,  gwcast , FutureFarming, New Holland